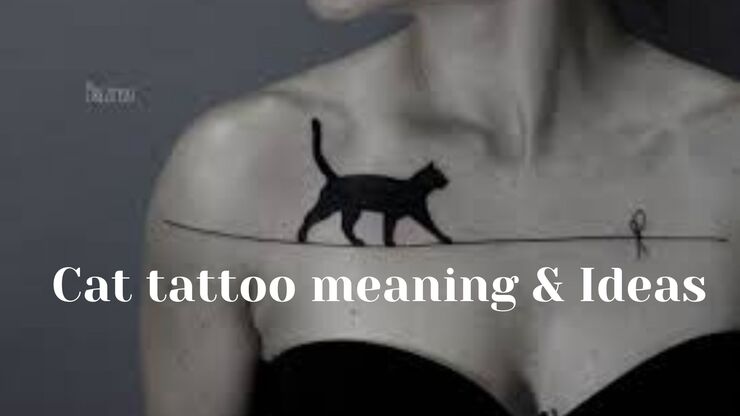 There are also some people in the world who believe that cats have 7 lives. So some people who want to live long, get cat tattoos on their bodies. the cat also represents resilience, You have noticed that cat tattoo is more popular among girls. This is because cats represent resilience and girls want to be resilient that’s why they draw a cat tattoos on their bodies to show people that I’m also flexible as a cat.

Another universal meaning behind people drawing cat tattoos on their bodies is that the guy or girl who has inked his skin with the cat tattoo loves their pet cat.

The black cat has different conceptions in different cultures. In some cultures, it is considered a sign of danger, bad luck, and disturbing the peace. In the Hinduism culture when the black cat gets in your way, they consider it a very dangerous sign. While in some cultures when their loved one dies or they are deceived by someone in love, they raise a black cat. Some people get black cat tattoos when one of their loved ones dies or they get cheated.

While in some cultures black cat is considered a sign of good luck, Development, and protection. So the people who are independent and want development, they got a black cat tattoo on their body.

Animal paws tattoo is another popular design among tattoo lovers. But here we will talk only about the cat paw tattoos. Both men and women make these tattoos on their bodies. girls prefer small designs while boys prefer large size cat paws. The meaning of this unique tattoo design is good luck, friendly and playful attitude, strength, self-confidence, and independence. So the people who got a cat paw tattoo, want to convey the message that they have a playful attitude, are independent, and can independently face any hard situation in life.

You may have noticed that most women get cat paw tattoos on their bodies what is the reason? The reason behind it is that women want to be powerful and independent. So the girls who draw cat paw tattoos on their bodies want to convey a message she is feeling good without anyone’s support, that she is powerful, and she is a woman who does not give up.

If you think that you are a bit different from other people and proud of it. If you want to convey this message to other people then for that you can choose any character from the Alice in the wonderland tattoos. The Cheshire cat is one of the most popular characters in the story, she makes strange movements and keeps smiling all the time. SO if you are the type of personality who keeps smiling every time and feel that I m a little different from other people the Cheshire cat tattoo is best for you.

There is a famous saying of an American sculptor Hiram Powers who said that” the eyes are the window of the soul” it shows the intellect and intention of any human being. 4 eyed cat tattoo means cunning, intellect, and wisdom. This tattoo represents you as the most intelligent and talented. 4 eyed cat tattoo conveys a message to people that you have the ability to see those things not everyone can see. And it also means that your vision goes too far.

Everyone that knows about tattoos also knows about skull tattoos. It represents death, destruction, and epidemic. The people who wear skull tattoos actually want to convey a message to the people that death can do not scare them. So the cat skull tattoo also means to give up the thoughts of death and enjoy your life. Or in short, don’t ruin your life because of the fear of death.

Flix the cat tattoo contains different designs and symbols. it tells a lot about a person’s personality and nature. The great warrior of ancient times gets Felix cat tattoos, so this is also a sign of braveness and power. These tattoos are best for men, most men get Felix cat tattoo to show their determination, courage, brutality, and romance. The men who decorate their bodies with these tattoos look more attractive and attend more female attention.

Do people also get their own pet cat tattoos on their bodies?

Yes, It is the best way to show your love for your cute pet cat.

Why do people get cat tattoos?

In many cultures, people believe that cats have seven lives. It is considered a sign of good luck, protection, self-independence, and protection. That’s why people get cat tattoos on their bodies.