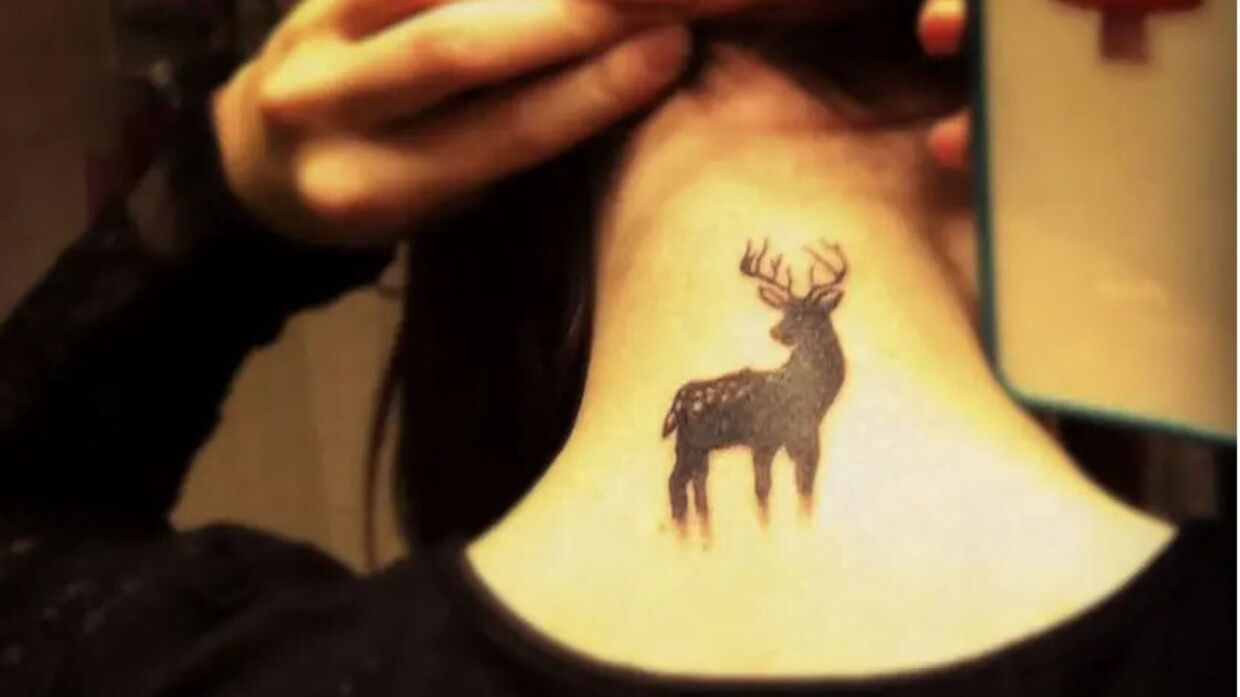 Since deer tattoos are getting more popular these days, a number of people are willing to get them on their bodies. However, what are deer tattoos meaning? What would it represent if it was tattooed on your body?

Quick Answer: Although the meaning of this tattoo may be different from person to person, However, the literal meaning of the deer tattoo is peace.

Make sure you read this article all the way through. You will learn some of the best deer tattoo design ideas, as well as the meaning behind them.

What’s the Meaning of Deer Tattoo?

Due to their gentle nature, deer and roe deer are revered as defenders of harmony and peace among all living things, including other animals. As a rule, deer stay out of trouble (except when provoked, such as during mating season).

For that reason, the Meaning of the deer tattoo is peace, kindness, and gentleness. The meaning may vary from person to person though. Some people have a different meaning of a deer tattoo in their minds.

What’s the meaning of a deer tattoo spiritually?

Deer tattoos have different meanings, as stated in the introduction. The spiritual meaning of the word is different from the actual meaning.

Deer have universally recognized symbols of spiritual power, spirituality, and spiritual renewal. Deer, for example, symbolizes piety, devotion, and sainthood in the Christian tradition. The deer, on the other hand, symbolizes femininity, elegance, and tenderness in Celtic culture.

What Are The Other Meanings Of Deer Tattoos?

The meaning of “deer” may vary from culture to culture or religion to religion. Other than the above two meanings, the deer tattoos have the following meanings as well:

The Best Deer Tattoos Design And Their Meanings!

Now, it’s time to tell you about some of the best and most famous deer tattoo design ideas. If you’re willing to get a deer tattoo, then make sure it depicts the meaning that you want.

To do so, look through the tattoos listed below and select the one that best represents your situation or feelings. This way, people would be able to tell what kind of person you are. If you want them to know this, though, Well, let’s just get to the designs now.

In cultures around the world, deer heads are displayed as trophies to represent human victories over imaginary or real beasts.

Whether it’s for hunting enthusiasts or those who are simply happy that humans are the dominant species and wish to express their pride in it, there are many deer tattoo designs and meanings to choose from.

If you want to show beauty and femininity through your tattoo, then you can do that with a flower deer crow tattoo.

This is another variation of a deer head tattoo. By focusing on the female component of such a tattoo design, it highlights the remarkable bond between deer and their natural environment.

Deer and their natural surroundings appear so harmoniously whole in these tattoo designs. Women and men alike can benefit from floral deer tattoos, despite the emphasis on feminine characteristics.

It represents rebirth and regrowth when there is only one antler deer tattoo. So, if you want to show a kind of rebirth and regrowth from your tattoo, you can do that by tattooing one deer antler on your body. The place of the tattoo can be the legs, chest, arms, hands, and whatever place that you like.

There is a spiritual meaning behind this deer tattoo. Geometric tattoo designs use symmetry, straight lines, and geometric shapes to create images and motifs in tattoos.

Typically, they are done only in black ink. Geometric tattoos are often inspired by sacred geometry, which gives particular shapes and ratios spiritual significance.

You can get this tattoo on your arms, hands, chest, and legs. Also, if you want it on another part of your body, you can get it.

A deer skull tattoo is one of the most popular at present. The reason this tattoo is famous is because of its meaning.

What’s its meaning? It means courage and a free spirit. Now you tell me, who doesn’t like to be called by these two amazing titles? Everyone loves chocolate, right? Moreover, the deer skull tattoo shows freedom from all kinds of limitations that you’ve had.

By being free, I don’t only mean that you’ve been a slave or something. Even though that freedom is also shown by this tattoo, that’s not the only type of freedom that this tattoo shows.

So, if you think that you’re a free bird and you want it to reflect your personality, then you can get a deer skull tattoo.

Ask yourself: What would a baby tattoo represent? I mean, what do you think can be represented by an innocent baby deer tattoo? The calves of a deer are a symbol of youth, innocence, and purity.

They can serve as a gentle reminder to treat youngsters and younger people in general with respect. Typically, deer calves are curious, playful, and a little uncomfortable. Through your tattoo, you can express all of these ideas.

The exaggerated deer crown tattoo is the second version of a deer head tattoo. Due to the fact that these tattoos are mainly about the deer crown, the deer’s head and body tend to be smaller than the crown.

With this design, we want to emphasise the deer’s strength and power, which are closely associated with its characteristics.

In the case of female deer, the crown is used to fight other deer and defend themselves from attacks. This tattoo can be applied to the arms, hands, chest, legs, and shoulders.

If you’re a male, then make sure you’re getting a male deer tattoo. What does this tattoo represent? It is common for male deer tattoos to pay homage to the animal and represent virility and strength.

Many deer tattoos hold a warning, but it is not one of violence, but rather one of taking protective measures against any threats made against the bearer or others close to him.

Not only that, the male deer tattoo has other meanings as well, such as regeneration or renewal.

The best places for getting this tattoo are the back, hands, arms, chest, legs, and shoulders. It is now up to you to decide where you want to go.

Not even females will be left behind as there is a female deer tattoo as well. This is the best for all the females out there.

What’s the meaning of this tattoo? It symbolizes spirituality/magic, femininity, serenity, kindness, motherly love, and beauty. So, women, what are you waiting for? If you want to get a deer tattoo, this female deer tattoo design is just for you.

10) Male and Female Deer Together

What if the male and female deer are together in a tattoo? What would it represent then? Tattoos depicting the stag and doe together have slightly different connotations.

As a symbol of a partnership, the tattoo conveys the message of protecting or being devoted to one’s partner. So, if you’re a couple who wants to get a tattoo together, then go for a male and female deer tattoo together. It’ll represent the love you two have for each other.

The location of this tattoo is entirely up to you. Whether you get it on your shoulders, chest, arms, hands, or wherever you want.

A lot of people don’t like getting complex types of tattoos. All they want is a simplistic tattoo with a good meaning.

For such people, I have a simplistic deer tattoo. As you can guess from the name of this tattoo, it’s quite simple. Inks of this type usually depict a deer silhouette with a few additional elements and colours. Gray and black are usually the colours of this tattoo.

Since the tattoo is simple, it won’t cost you much money either. But this is a kind of tattoo that suits all types of personalities and body types. This tattoo is the best for showing the fragility and gentleness of a woman and a man.

So, these are some of the best deer tattoo designs and their meanings. Go for the one whose meaning relates to your situation the most.

What are the best Places To Get  A Deer Tattoo?

A lot of people easily select the design that they want to get, but where to get the tattoo is the real problem for them. So, if you want to get a deer tattoo on your body, then now I’m going to tell you some of the best body parts that you can get the tattoo on. So, let’s dive in!

So, these are the areas of your body where you can get any type of deer tattoo. Now, it’s time to answer some of your questions. So, let’s do that.

The meaning of the deer tattoo in Spanish is the same as in English. It’s “Peace, kindness, and gentleness”.

2) What is the meaning of a deer antler tattoo?

The deer, however, can symbolize strength, dominance, power, as well as caring, kindness, and compassion.

Many people today choose to get deer antler tattoos because they can mean more than just the leader of the pack.

3) How do stag tattoos work?

There are many beautiful animal tattoos available, but deer or stag tattoos are among the most beautiful. In practically every civilization where it existed, the great stag served both a legendary and a utilitarian function.

So the meaning of a deer tattoo is peace, kindness, beauty, and gentleness. However, the meaning can be changed according to different cultures and people. You now understand the significance of deer tattoos.

Also, you know about the best and most famous deer tattoo designs that you can get on your body. Still, if there is any question that you have in your mind about this topic, Feel free to ask it in the comment section below. I’d love to help you out.